America is likely going through a COVID wave as big as the one in January. Official caseloads are much lower, but this data is no longer trustworthy due to underreporting of rapid tests and other factors.  COVID appears to mutate rapidly enough to cause a new mass wave of infections every 6 months or so.  Many people have had COVID two or even three times already.  Should we care?  It seems like our options going forward are:

(1) Just give up.  This seems to be the choice of most of the world right now.  There is some argument for this -- disease severity is much lower than it used to be, and the current massive wave of infections is not translating into a massive wave of hospital admissions and deaths.  However, COVID is a weirdly invasive disease that causes creepy debilitating long-term effects (fatigue, brain fog, decreased cardiovascular health, increased risks of other diseases) in a few percent of patients.  There is some evidence that repeatedly getting COVID increases the risk of long COVID, and with the "just give up" approach, a large fraction of the US is on track to get COVID every six months or so.  I'm concerned that long COVID will end up being a major public health crisis in the same way that diabetes brought on by poor diet is; this will shorten lifespan and healthspan, and be a significant burden on the medical system.

(2) Mostly behave as normal, but mask when possible and rigorously test and isolate if sick to prevent infecting others.  I've personally been doing this for a while, and this strategy worked well for South Korea and other Asian countries prior to Omicron.  However, the cost and time inconvenience of it is significant. I've personally spent thousands of dollars avoiding COVID (and then avoiding infecting others when I finally did catch it a couple of weeks ago).  Most people aren't going to work that hard.  Additionally, the reduced severity and increased infectiousness of Omicron makes implementing this society-wide untenable.  Even South Korea's fantastic test-and-trace system wasn't able to handle Omicron.

(3) Rigorously lock down until caseload goes to zero, and create sharp barriers to immigration.  This is what China is doing and it continues to work well for them at the cost of periodic mass lockdowns as well as isolation from the rest of the world. It's clearly politically unthinkable outside China.

There is a 4th option -- what I'd like to call Vaccine Battleship.  Basically, if scientists, pharma companies, and regulators move really quickly, they can identify new variants of concern, target vaccines against them, scale up production, and then get them distributed before the virus mutates too far.  Every few months, millions of immune systems would get a sneak peek at the currently active variants, and that would blunt the impact of these new variants on the population.  Like a genetic game of Battleship, drug makers would predict the genetic locations of future variants and drop targeted vaccines on them.

The mRNA approach is flexible enough that it can be very easily adapted to different variants, and the safety and efficacy of variant-specific vaccines should be similar to the original.  The FDA and Pfizer / Moderna are sort of pursuing this approach, but they're doing it too slowly.  Omicron-specific mRNA vaccines were proposed in January, the FDA met to approve them in late June, and they will hopefully be available in the fall.  That ~10 month period is enough time for the virus to mutate substantially such that the vaccine effectiveness against infection is no longer high enough to stop or even substantially slow the spread of the virus.

Pfizer says a variant-specific vaccine takes four months to ramp up production, so we need to compress the testing and approval process.  Separately, Congress has chosen not to authorize funds for the purchase of variant-specific vaccines, and the Biden administration is trying to pay for it in other ways, which is causing delays and may limit supply.  This seems crazy; vaccines are by far the cheapest public health intervention we have in fighting COVID.  If you're looking for a way to influence this process, write your congresspeople to advocate for spending on variant-specific vaccines.  Even based on the cost of workplace sick days alone, spending $10 billion to get everyone in America a vaccine booster is a great deal. It's the best short to medium term option we have for limiting the number of times America is battered by successive COVID waves.

I'm excited for a future where our immune systems periodically get the cheat codes to defeating all the viruses in circulation; this could have immense public health and productivity benefits in terms of decreased sick days and increased healthspan. Immunologist friends of mine caution that it's not as simple as it sounds, but this approach does hold a lot of potential.

The nuclear family was only broadly achievable for a brief period of time in American history, and the continued pursuit of it is causing a range of societal problems. 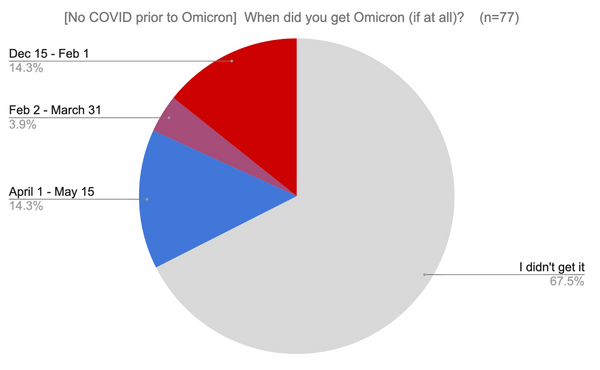